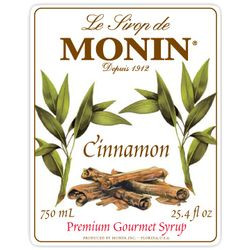 Monin Cinnamon Syrup
This fragrant spice evokes images of cinnamon rolls hot from the oven. Derived from the bark of an evergreen tree native to Sri Lanka, cinnamon is one of the oldest spices known. Among ancient nations, cinnamon was so highly prized that it was regarded as a gift fit for monarchs and other great potentates. Throughout history, cinnamon's popularity continued. The characteristic rich, warm and sweet fragrance of cinnamon made it one of the most evocative of spices and a popular ingredient in many cuisine's worldwide, especially in cakes, cookies, and desserts.
Monin Cinnamon grants the ability to bring this exotic spice to your favorite unique beverages.
Tasting Notes
• Pure cinnamon stick aroma, spiced, sweet, distinctive cinnamon
Applications
• Lattes, mochas, milk steamers, teas, smoothies, hot and iced coffee, ciders, cocktails