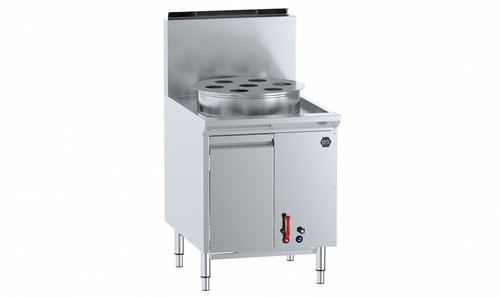 The B+S Black series Yum Cha and Rice Roll steamers have been developed without the need for water deck cooling whilst ensuring that the exposed surface temperatures are kept to a minimum and the deck of the appliance will not buckle. This unit is heavily constructed on an inner stainless steel frame which ensures long term longevity and durability.

The new design incorporates a concealed water-boiling chamber that is automatically filled as required. This not only eliminates time constrained chefs being able to inadvertently leave the water taps on, but also ensures only water that is needed for cooking is consumed. Steam generated from within the chamber is then released via a steam vent located on top of the appliance and into the steamer tray cooking area.

Now using 15% less gas the HE steamer is the most efficient steamer in the market while still providing a strong supply of steam. Water boils in less than 20 minutes from ambient temperature of 20 degrees Celsius while water consumption is reduced by up to 100 litres per hour.